I have come to love my crockpots dearly... & I now have 3 of them, after only having one for several years... yet all the while I really could have used 3 of them because I pretty much always using mine! 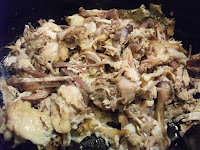 One thing I have read over & over about is "old fashioned" bone broth & how healing it is to one's gut.  Healing the gut is especially important for anyone trying to heal their gut from damage caused by a food intolerance, medication, etc.

So here you go... the EASIEST broth ever.. seriously, it IS!!  If you don't have a crock pot you can make it stove top & simmer it on low for several hours (or less time if you need it ready sooner), but will obviously have to watch it more closely.


Didn't I tell you it's super easy?!  Ahhhhh, REAL broth ready to drink as-is or to be used in a soup, casserole, gravy, etc.!!
NOTES:

- There is no right or wrong really to the size of crock pot, etc.  You will find what works for you after making it a time or two.  I tend to let mine simmer for 12-24 hours in a crockpot.

- If you want it to gel once it cools, then use less water.  If you don't care about it thickening up, then feel free to use more water freely.

- If you desire the broth to gel up but want to make a lot of broth, you could also use 2-3 carcasses if using a smaller roasting bird (in order to have 2-3 at the same time, you can freeze the carcasses after you  until you have however many you want & throw them right into the crockpot frozen; I would break the bones open BEFORE freezing though to avoid trying to break open frozen bones)


Do YOU make broth from scratch??  Have YOU ever made bone broth??  What is YOUR favorite broth to make??

Be sure to come back & let me know how you like your broth!!

Posted by Unknown No comments: Links to this post

I'm Mama Lee - A daughter of the King, wife & helpmeet to Mr. Lee, mama, teacher, & mentor to a handful of blessings...

I am a self-professed crunchy, trying to live as natural as possible, frugal mama w/all kinds of ways to save money, make things stretch, & to make your pennies beg for mercy too!!